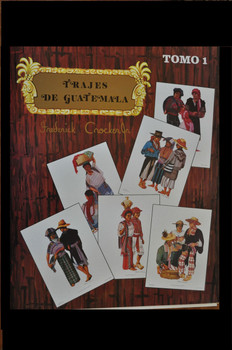 "Trajes de Guatemala reprinted in two portfolios in 1976 by Byron Zadik y Cia. from the original plates dating to 1952. Images taken from watercolors by Frederick (Pat) Crocker painted in 1940. Tomo I, includes images of Coban, San Antonio Aguascalientes, San Martin Chile Verde, Santiago Atitlan, Solola and Todos Santos. . .  Pat traveled to Guatemala and was immediately and deeply compelled by the "land of eternal Spring," and particularly by the native costumes and the colonial architecture. In Guatemala City Pat met Tocsika Townley Roach who had lived in Guatemala since 1917. She had opened the first textile shop in the city and had, over the years, assembled a fine collection of trajes. Recognizing Pat's talent as an artist, Mrs. Roach convinced him to find models to wear the costumes and to paint a series of watercolors that were intended not so much as art, but as a record. The Roach Collection was eventually purchased by the United Fruit Company and donated to the National Museum in Guatemala City. In 1943 the watercolors were exhibited in the Brooklyn Museum, and in 1948 hung at the Cotton Carnival Museum in Memphis, Tennessee. The paintings were not for sale but the many inquiries led to the lithograph reproduction in two folios of six designs printed by Byron Zadik S.A. of Guatemala City. The first edition appeared in 1953 and the second, shown here, in 1976. High artistic and ethnographic value."

These fine quality colored lithographs were printed by Lithografia Byron Zadik in Guatemala City.   They were reproduced from original watercolors by Frederick ("Pat") Crocker, Jr., depicting traditional Guatemalan costume of the period 1945-1960. This set includes all six of the costume prints plus a full-size cover sheet detailing the work, all included in a printed color portfolio.  Obtained from the family, this set is in FINE as New condition.