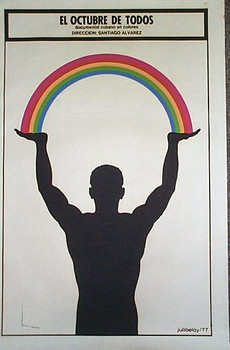 Condition: Light edge rubbing and light foxing at very edges; a small fold across one corner, not touching the border. The paper is very slightly toned; there is also some very light rubbing in black areas.

NOTE: Though many Cuban movie posters have been re-issued in the last few years (the re-issues are also silkscreen prints, created in the same manner as the originals and indistinguishable except that the paper is bright and white), this appears to be an older production.

"Cuban silkscreen posters, whether new or old, can have original printing defects such as uneven borders, thick ink areas and uneven color and texture. Older posters can have some foxing, edge wear, possible bleed through, and cracking from dryness". These are the facts of Cuban production and storage in a humid climate.