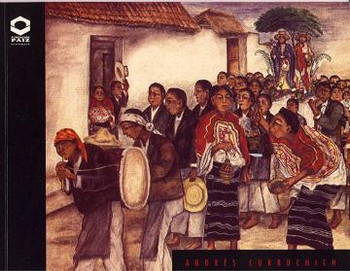 Exhibition catalog of show at the Museo Ixchel in Guatemala City in 2000
Andres Curruchich Cumez was the first and most important of the naive painters of Comalapa. He was born in 1891, and began to paint in the 1920s as a means to try to earn extra money. In the 1930s and 1940s he was invited to exhibit his works in various festivals and fairs in Guatemala. By 1950 his work was known in Guatemala City, and at this time he began to paint in oils on canvas. During the 1950s he exhibited in Guatemala City and at various galleries in the United States. His work depicted the life of his native Mayan people in very simple and understandable form. Curruchich was awarded the Order of the Quetzal by the Guatemalan government in 1960 for his value and contribution to the nation. He died in 1969.

This book is the catalog of a retrospective exhibition of about 35 of his works. The show was at the Museo Ixchel del Traje Indigena, in Guatemala City, in 2000. It is a NEW book purchased in Guatemala. There may be some slight rubbing to the cover from transportation and storage. This is also the First Edition of 1000 copies, and is totally in Spanish.