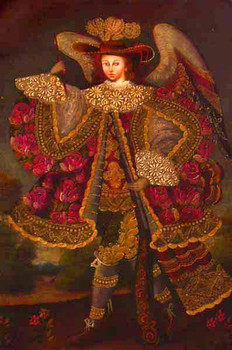 Cusco School painting measuring 16 x 24 inches, unstretched
This painting depicts the Arquebusier Archangel Laeiel , cleaning his arquebus. The clothes of these angels are those worn by spanish soldiers at that time, Vandyke collar and dress coat with slashed sleeves, shirt and long vest, knee breeches, socks and bow shoes; the head covered by big hats adorned with feathers and ribbons. Angels and Archangels are one of the most characteristic themes of the viceregal painting in America. Their originality lies in its iconography and the excellence with which they have been portrayed in contrast with the european versions. Angels are heavenly messengers, mouthpieces of good news, but they can also carry ominous messages with them. The arcabuceros or arquebusiers are a series of angels dressed in military clothing. They hold guns in different attitudes and the complete series must have represented a whole company.

This painting is oil on canvas and measures 16 x 24 inches. It is not stretched, and was painted after the year 2000. It will be mailed in a hard tube.

The history of the Peruvian painting has its origins at the colonial era. The Spanish painters who arrived at the Viceroyalty of Peru taught their techniques to the local artists, and they began to shape on linen cloths their own representations, creating a new iconographic interpretation of the Peruvian reality. The Catholic divinities were adapted to indigenous sensitivity and given a singular representation that had its maxim expression in the "School of Cusco Painting" ( La Escuela Cusqueña), during centuries XVII and XVIII.

This painting has been done in the style of the works of La Escuela Cusqueña, the history of which is traced to the 17th century. Originally influenced by Spanish and Italian artists, this school was commissioned to paint sacred art in churches and monasteries throughout the Peruvian city of Cusco after the area was devastated by an earthquake in 1650. The collected efforts of numerous artists gradually evolved into a unique yet harmonious and consistent style, devoid of individualism. These paintings are usually not signed, but represent traditional depictions of the religious subjects most important to the local indigenous and Hispanic populations.